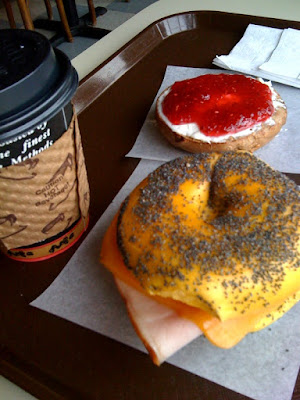 I went to the Bagel Deli on 15th Ave Sunday morning with my boyfriend for a breakfast bagel and some coffee. This was my first time going to the Bagel Deli and I was surprised to find the place empty. Especially on a Sunday morning. I ordered the ham, egg and cheese bagel with a vanilla latte.
I was really disappointed. The bagel taste just like the kind I would normally buy at Safeway or QFC, and I was not impressed with the ham, cheese or egg. I honestly would have rather had a breakfast muffin from McDonald's. It would have tasted better.
The vanilla latte wasn't all that great either. I would recommend walking down the street to either Victrola or Cafe Ladro. My latte barely had any vanilla syrup, so it basically tasted like a drip coffee. My boyfriend ordered "The Gobbler" turkey sandwich bagel as well as a bagel with cream cheese and strawberry spread. He said both were pretty average, but nothing that he would definitely order again.
I've heard a lot of people say that Seattle isn't really a good city for good bagels. I guess I would agree with that so far and continue on my quest for a good bagel sandwich. Any suggestions??
I give Bagel Deli 2 out of 5 bagels.

Posted by Chow Down Seattle at 5:23 PM

I would recommend Louisa's on Eastlake. Their bagels are the best I've ever had because they have a very nice glaze and have a certain sweetness to them that is just addicting! And if you want a good bagel sandwich this is your place, I believe their sandwich is called the McTio (not positive). It's on Eastlake across the street from Pomodoro (also a great place for pasta).

I love Louisa's! I used to live in the Eastlake neighborhood, and I would go there every morning for their delicious cinnamon rolls! I miss living there, but I have made it back a few times for breakfast. I will try their bagel sandwich the next time I'm there. Thanks!