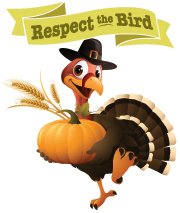 Thanksgiving is my favorite holiday. I love the fact that Thanksgiving is all about being with your family and friends to enjoy a great dinner, and to give thanks for all the good things in your life. It's not about going into debt buying a bunch of useless gifts. Unfortunately, Thanksgiving is slowly being overrun by Christmas. Retail stores are putting up their Christmas displays earlier every year. Some stores have their Christmas items out before Halloween!

The Friday after Thanksgiving is known as "Black Friday". This name was given as it indicates the point at which retailers begin to turn a profit, or are "in the black".  It is typically the busiest shopping day of the year. Retailers open their stores very early on Friday morning. Some open at 4am or 5am, and now this year some are opening at Midnight! That is ridiculous! Now the store employees you have to work that shift will miss out on most, if not all, of their Thanksgiving holiday, since they will need to get to bed very early to be well-rested for their work shift. Where will it stop? Will retailers be open on Thanksgiving Day next year? Is it really worth it? The over-commercialization of Christmas is threatening Thanksgiving.
I'm not the only one who feels this way. Below is a press release from Allrecipes.com.

SEATTLE, Nov. 1, 2011 /PRNewswire/ -- Is Thanksgiving as we know it an endangered species? With Halloween's ghosts barely banished, each year retailers push the Christmas season upon consumers earlier and earlier – and all at the expense of the Thanksgiving holiday. But the Allrecipes.com community is out to turn that around. Inspired by community member Doug Matthews' November 2010 blog post lamenting the commercialization of the holiday season, Allrecipes, a Reader's Digest Association (RDA) company and the world's #1 digital food brand, today announced its "Respect the Bird!" campaign: a grassroots movement to savor the true meaning of Thanksgiving and tune out the distractions of Black Friday that have intruded upon Thanksgiving week.

A national survey from Allrecipes found 82 percent of home cooks think Christmas is marketed too early and that the Thanksgiving holiday gets too little attention as a result. Moreover, 42 percent admit being frustrated by Christmas shopping sales that begin before Thanksgiving while 39 percent just try to ignore them.

"Thanksgiving is an amazing holiday and I believe I was speaking for a lot of people when I wrote the blog post last year about Respect the Bird," said Matthews, leader of the Respect the Bird movement. "I am thrilled that Allrecipes is taking Respect the Bird to a new level with this campaign and I hope it sets a precedence that the holiday be celebrated by sharing thanks and good food with friends and family, not Black Friday shopping!"

With thousands of top-rated Thanksgiving recipes from classics such as Homestyle Turkey, the Michigander Way to exotic side dishes such as Holiday Cranberry Chutney, Allrecipes will be the go-to resource for Thanksgiving meal planning, expecting 28 million visits the week leading up to Thanksgiving day – a 35 percent increase over 2010.

"Allrecipes.com thrives on its vibrant user community of more than 25 million passionate home cooks like Doug Matthews," said Lisa Sharples, President of Allrecipes. "When we saw how our community responded to Doug's blog, we knew we had to help that community express its appreciation for what we all think is truly the best day of the year."

This means that Friday would be the thanks giving Friday for all and they avail it by celebrating it. That is nice

That must be the nice event held on Friday and the peoples must enjoyed that day.