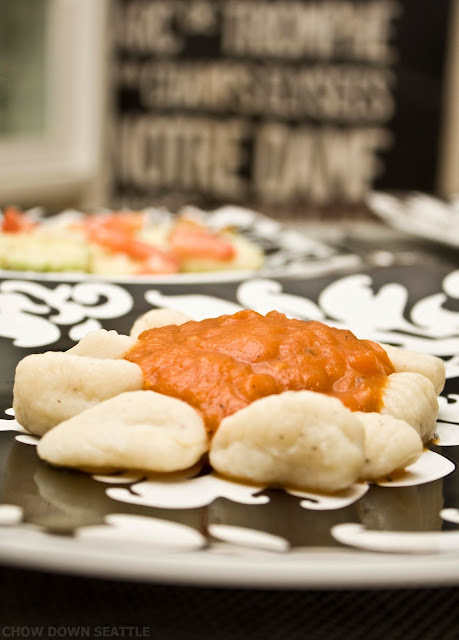 First off, I love pasta! Any kind, any shape! I have pasta at least two or three times a week, if not more. I think it might have to do a little with my childhood. My Dad was in the Air Force and after I was born, he was stationed in Aviano, Italy. We lived there for about three and a half years. Of course being that young you could hardly remember much, but there are a few things I do remember at that age. We lived next door to our landlord. They were a typical Italian family and they became good friends of my family. While my parents were working and my brother was at school, our landlord's wife would babysit me, and I would play with her son who was my age. Needless to say, I ate a lot of traditional Italian food at a very young age. I wish I could remember how it all tasted! So I'm thinking my love for pasta, Italian food, and for Italy comes from my early childhood.

One thing I have never tried making is fresh, homemade pasta. That of course changed when I was watching a show called "Playing with Fire" on the E! Network. The series chronicles the personal and professional lives of five chefs, stars and taste-makers who have risen to the top of New York's culinary world. One of the chefs is Anna Boiardi. She is the granddaughter and niece of the founders of Chef Boyardee. In one of the episodes, Anna's Mother prepared homemade ravioli for her grandson. As I watched this, I thought to myself, how hard could it actually be to make fresh ravioli? Of course I was watching an Italian from a pasta empire prepare fresh pasta, so it's second nature to her.

So, in my pursuit to make fresh pasta, I did some research on recipes and techniques. Luckily, my best friend's Mom had the pasta attachment for her Kitchen Aid mixer. She let me borrow it to use it on my mixer. I made some basic pasta dough and went to work making some fettuccine. It turned out pretty good. It tasted way better than store bought pasta. I then experimented with some cheese ravioli, and that turned out pretty good too! So, my next challenge was to make some fresh gnocchi, one of my favorite pasta dishes.

I had a gift card from Sur la Table that I received at Christmas. I had been contemplating what to purchase with it, and then after researching some pasta tools, I ended up buying a potato ricer, a gnocchi board, a ravioli stamp, and a ravioli maker. I'm very pleased with my purchases. This past weekend I took on the task of making fresh gnocchi. It's quite a long process, but my gnocchi turned out pretty good for my first crack at it. I used a recipe for the gnocchi from Lidia's Italian Table. I wanted to share the experience of my first try at fresh gnocchi.

Potato ricer used to rice potatoes. Sometimes used as an alternative to mashing potatoes.
Gnocchi Board is used to add ridges to gnocchi and other pastas.
﻿
The first step in the recipe is to boil three russet potatoes for about 40 minutes. Once they are peeled, they are riced using a ricer. Once the potatoes are riced, they look basically like raw hash browns.
After the potatoes have cooled, they are formed into a mound resembling a volcano. An egg mixture is added to the center. Flour is added to the mound, and the mixture is slowly incorporated and kneaded together to form a nice ball of pasta.
﻿


After forming a pasta ball, it is cut into six equal pieces. Each piece is rolled out into a rope that is about 1/2 inch thick.


Once the pasta is rolled out into a rope, it is cut into 1/2 inch pieces.


For my Birthday, I received a bottle of Dave's Gourmet Butternut Squash Pasta Sauce. I decided to use this pasta sauce for my gnocchi and I'm glad I did! It's delicious! I highly recommend it. My gnocchi turned out much better than I would have expected for my first try. It was tender and not tough or chewy. It was the perfect size and texture.

I was very encouraged by how my gnocchi turned out. I'm already looking forward to making my next batch. I want to experiment with different sauces and meats to add to the pasta. I'm excited to also mak3 many different kinds of pasta. I want to make more fettuccine and ravioli, as well as making some tortellini. I want to explore the wonderful world of Italian cuisine, so be prepared for more pasta blog posts! Mangia! Mangia!


Place the potatoes in a large pot with enough cold water to cover. Bring the water to a boil and cook, partially covered, until the potatoes are easily pierced with a skewer but the skins are not split, about 35 minutes. (Alternatively, the potatoes can be baked in a preheated 400°F oven until tender, about 40 minutes.)
Drain the potatoes and let them stand just until cool enough to handle. (The hotter the potatoes are when they are peeled and riced, the lighter the gnocchi will be.) Working quickly and protecting the hand that holds the potatoes with a folded kitchen towel or oven mitt, scrape the skin from the potato with a paring knife. Press the peeled potatoes through a potato ricer. Alternatively, the potatoes can be passed through a food mill fitted with the fine disc, but a ricer makes fluffier potatoes and therefore lighter gnocchi. Spread the riced potatoes into a thin, even layer on the work surface, without pressing them or compacting them. Let them cool completely.
In a small bowl, beat the egg, salt, pepper, and nutmeg together. Gather the cold potatoes into a mound and form a well in the center. Pour the egg mixture into the well. Knead the potato and egg mixtures together with both hands, gradually adding the grated cheese and enough of the flour, about 1 1/2 cups, to form a smooth but slightly sticky dough. It should take no longer than 3 minutes to work the flour into the potato mixture; remember, the longer the dough is kneaded, the more flour it will require and the heavier it will become. As you knead the dough, it will stick to your hands and to the work surface: Repeatedly rub this rough dough from your hands and scrape it with a knife or dough scraper from the work surface back into the dough as you knead.
Wash and dry your hands. Dust the dough, your hands, and the work surface lightly with some of the remaining flour. Cut the dough into six equal pieces and set off to one side of the work surface. Place one piece of dough in front of you and pat it into a rough oblong. Using both hands, in a smooth back-and-forth motion and exerting light downward pressure, roll the dough into a rope 1/2 inch thick, flouring the dough if necessary as you roll to keep it from sticking. (When you first begin making gnocchi, until your hands get the feel of the dough, you may find it easier to cut each piece of dough in half to roll it.)
Slice the ropes into 1/2-inch-thick rounds. Sprinkle the rounds lightly with flour and roll each piece quickly between your palms into a rough ball, flouring the dough and your hands as needed to prevent sticking. Hold the tines of a fork at a 45-degree angle to the table with the concave part facing up. Dip the tip of your thumb in flour. Take one ball of dough and with the tip of your thumb, press the dough lightly against the tines of the fork as you roll it downward toward the tips of the tines. As the dough wraps around the tip of your thumb, it will form into a dumpling with a deep indentation on one side and a ridged surface on the other. Set on a baking sheet lined with a floured kitchen towel and continue forming gnocchi from the remaining dough balls. Repeat the whole process with the remaining pieces of dough. At this point the gnocchi must be cooked immediately or frozen.
To cook gnocchi:
Bring six quarts of salted water to a vigorous boil in a large pot over high heat. Drop about half the gnocchi into the boiling water a few at a time, stirring gently and continuously with a wooden spoon. Cook the gnocchi, stirring gently, until tender, about 1 minute after they rise to the surface. (You can cook the gnocchi all at once in two separate pots of boiling water. If you make a double batch of gnocchi, I strongly recommend cooking them in batches in two pots of water.)
Remove the gnocchi from the water with a slotted spoon of skimmer, draining them well, and transfer to a wide saucepan with some of the sauce to be used. Cook the remaining gnocchi, if necessary. When all the gnocchi are cooked, proceed according to the directions for saucing and serving in each recipe.
When saucing gnocchi, remember this tip: If the sauce is too dense or the gnocchi seem too dry, use some of the gnocchi cooking water to thin the sauce and moisten the gnocchi, as you would with pasta dishes.

Posted by Chow Down Seattle at 9:58 PM